Many tests for assessing speech in children and adults rely on naming activities or choosing between different responses. While these tests are actually useful and quick to fix, risk not capturing the complete communication profile of the person we are observing, with the risk of not achieving the actual objectives of any intervention.

In fact, discursive and narrative skills represent the most "ecological" linguistic component as the language of the child and adult manifests itself not in a series of naming or selection skills, but in the ability to communicate with others and report their experiences.

Precisely for this reason, the ultimate goal of a speech intervention should be to improve a person's ability to understand the information they receive and express themselves as completely and accurately as possible. We certainly could not define "successful" a speech intervention capable of increasing the number of words of a given test recognized by a child, but which then does not have a practical consequence in his ability to communicate with others.

Despite this, discursive and narrative skills are often neglected in language assessment, unless there is an explicit request. This happens both because in the initial stages of language acquisition the focus is much more on the phonological-articulatory aspect - also because it is very easy to identify a child who makes pronunciation errors, while the child with narrative difficulties often reduces its interaction to short answers and for this reason he is often labeled as shy or introverted - both because objectively the analysis of the narrative is longer and more tiring, especially if you are not used to doing it.

Regardless of the tests used, there are two indicators that can provide us with valuable information on the speech and narrative skills of the child and adult:

For further information on further measures, we recommend the manual "Speech analysis and language pathology”By Marini and Charlemagne [2].

[3] Nicholas LE, Brookshire RH. A system for quantifying the informativeness and efficiency of the connected speech of adults with aphasia. J Speech Hear Res. 1993 Apr; 36 (2): 338-50 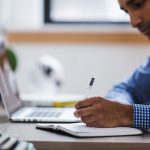 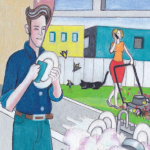 What if the husband was doing the dishes? The new version of "Cookie Theft"Aphasia, Aphasia